The replacement seats by Exmoor Trim is offered in Pairs only, complete with Sliders/runners and all fixings as a bolt straight in pair of seats which utilise the original four mounting points in the seat box.

This Classic style stayed in production from approx 1986 right through until 2007 when the seats were then upgraded again.
As the later seat trim options came in and over time the trim standard was raised in the later years. Production seats were then offered with internal seat heaters this was then truly a big deal, heated seats in a land rover! now its very much the normal, so at Exmoor we have decided to heat all our Classic Defender front seat pairs as standard fitment.
Both seat backs and bases are heated internally and the heater wiring all clips together so you can still remove the seat bases when required.  Many of the earlier vehicles never had seat heaters fitted so we also include with all our Classic Defender seats as standard with a full wiring loom for the seat heaters.  These also give illuminating heater switches so you can control both seats individually with a hi & low heat option and the wiring loom includes the inline fuses a wiring instruction which you can also download.
We use a higher grade foam than originally used to increase the life span of these seats and much improved levels of comfort.
All coming together to give a great pair of Classic Seats by Exmoor.
As with all Exmoor Trim front seats these use our new Defender seat frame and are issued with full testing certificate to keep with your log book.  Don’t settle for less, safety matters. 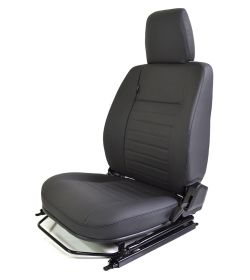