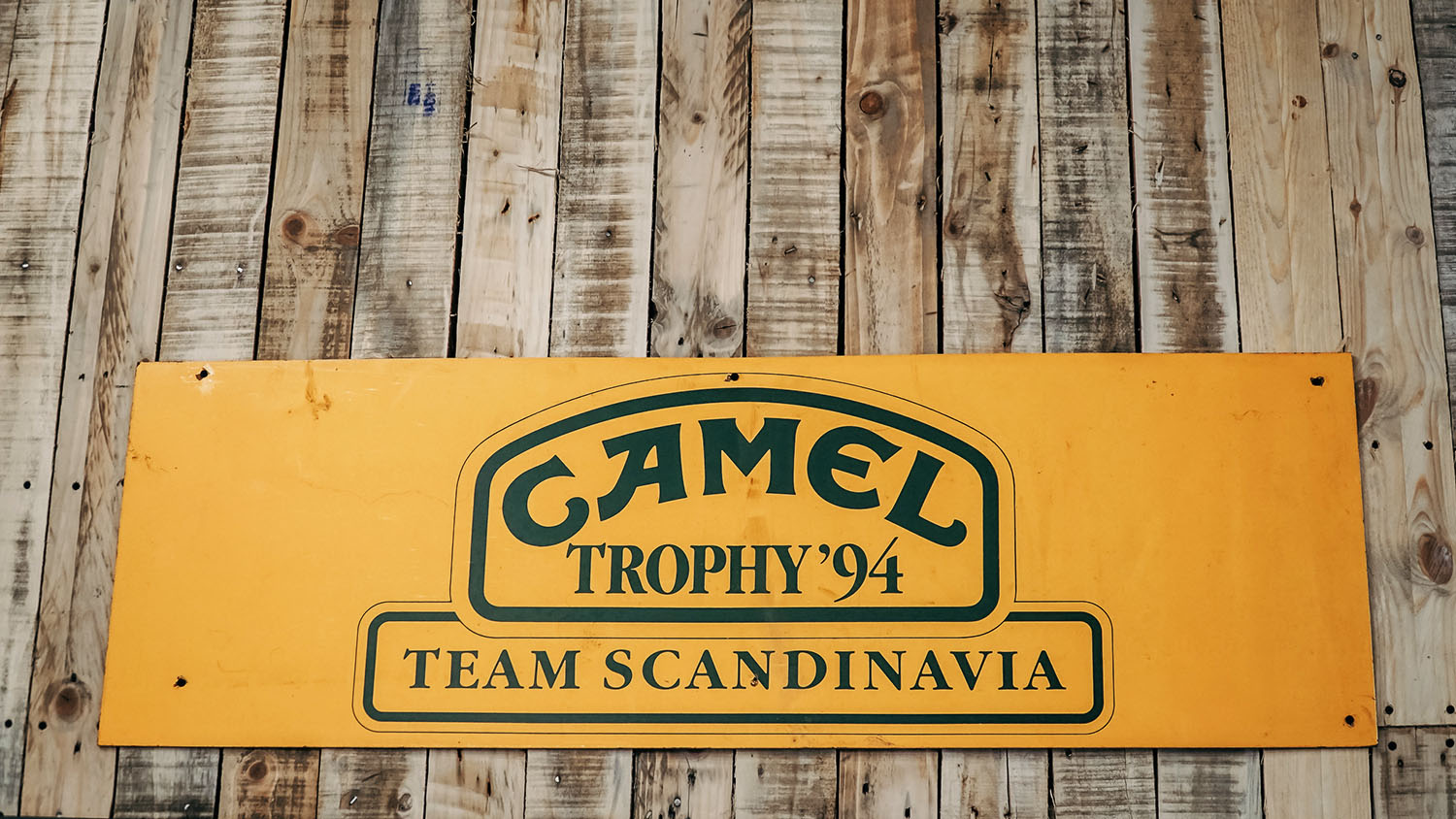 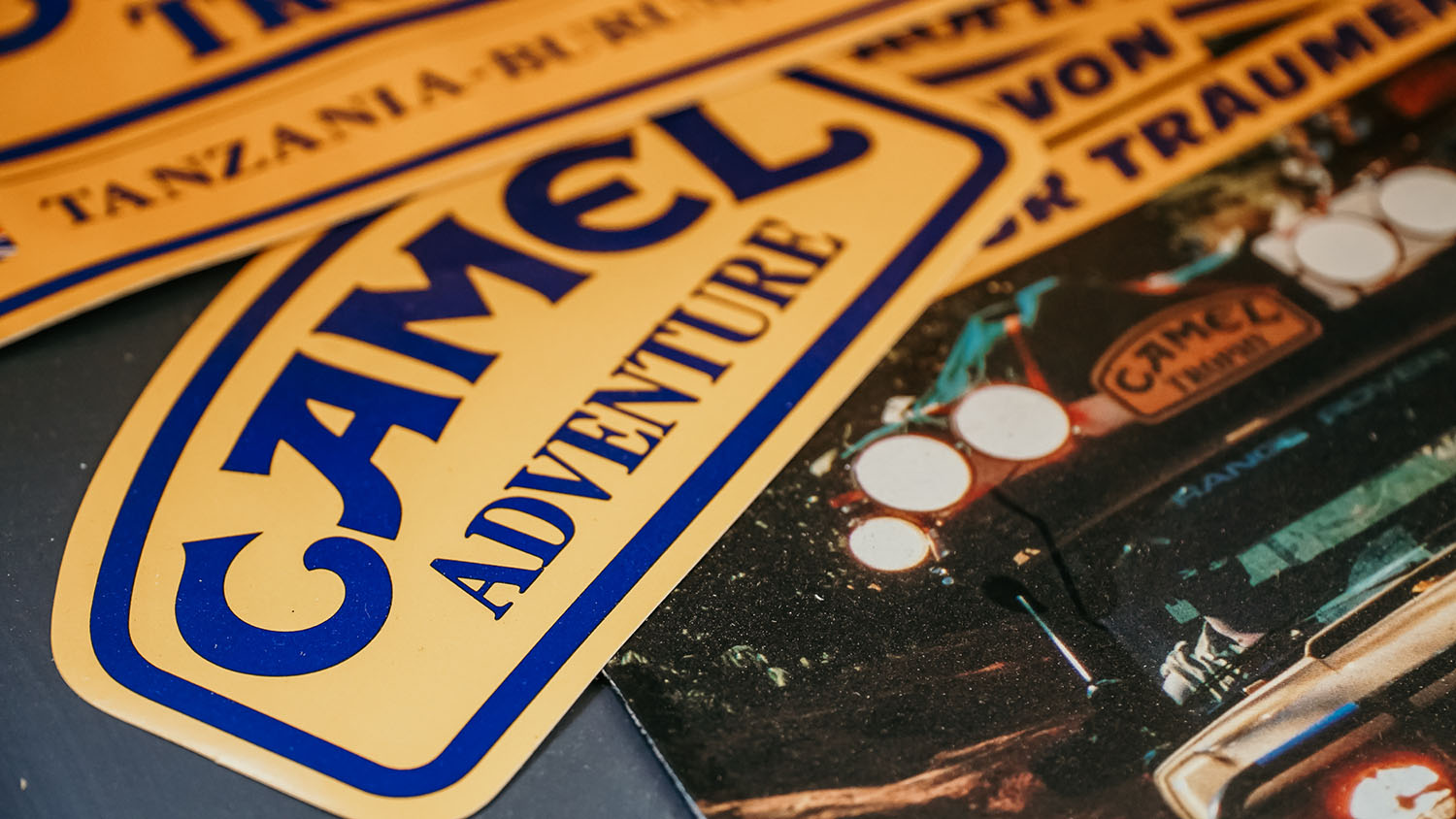 Exmoor Trim will soon be opening their showroom and shop - giving our consumers the chance to look around the heritage that comes with our unique business and with Land Rover...

Travel through time, starting with Julian Gostling’s grandfather - who worked at Land Rover in the early years - and through the long period when Julian’s father Lew also worked at the famous Solihull plant.

You can experience the huge range of products manufactured by Exmoor Trim - from the Series I range, to hundreds of items made for the Defender. Part of the showroom will be filled with Camel Trophy memorabilia which belonged to the race’s technical advisor.

How did the idea of the Camel Trophy come around?

Camel Trophy started in 1980. The concept was a German idea. The organisation originated the name from the main sponsor – the Camel cigarette brand - hence the sand colour for the vehicles.

It had nothing to do with Land Rover at the beginning. The event started in 1980 and took part on the Trans-Amazonian Highway using Fords.

They then went on to use Range Rovers and started to use Land Rovers at later date - which is where I came in. My first trip was in Zaire 1983 - the year they started using Land Rovers. The Series III 88” to be exact, with the support vehicles - Series III 109.

They always planned 9 months before the event took place. I was working for Land Rover at this point and as a joke got asked whether I would like a holiday. Next thing I knew I was flying out to Germany for an interview. I had my interview in the German airport, then flew home the same day! I had a phone call and was offered the job of Competition Manager.

What was your role within the Camel Trophy events?

I was first the Competition Manager - which involved making the selection for the finalists to take part in. One of my fondest memories was the drivers’ selection, which was held on the side of Mount Fuji. It was a real famous event out there. There was another great one in ’93 in Sweden, where they hired the military test ground.

The driver’s selection – each individual country (marketing unit) would do the initial stages with 30,000 applicants. They would narrow it down to around 48 to 50 people - that’s when I used to get involved. There were 250 shortlisted, all the information was passed over to me - and I telephoned every single one in a series of telephone interviews. I did the recommendations and we chose 8 people – we then took them to the camps (48 people in all) did some tasks – road driving, winching, assault course, carrying trees…

It was amazing! How many people would have the chance to go around the world to such unique places? I managed to go abroad 20 times with this job - and 90% of that would be in my own time. I would work on weekends or holidays, as I still worked for Land Rover at the time.

I then became a technical advisor due to my past and knowledge with Land Rover. It involved being very hands-on before the event, making sure everything was running okay before they left. As time went on, I was more involved with the actual event - until the end of 1987, which is when the marketing team became more involved.

The events I was involved in were Zaire, Brazil, Borneo, Australia and Madagascar. The big bonus was that I was also able to travel the world doing the drivers’ selections - well into the 1990s - to countries such as Holland, Belgium, France, Spain, Japan and America.

Where did your passion come from for Camel Trophy?

An opportunity arose when Marketing came to see me and said: ‘How do you fancy a holiday in a jungle?’

My response was: I’ll have a crack at it!

They introduced me to the Camel guys, and I got the job. So, I guess you could say the passion came when the work started, and I travelled to all of these amazing places.

Where was your favourite Camel Trophy held?

Zaire. A very long trek! The one that was mostly out in the wild. You were really on your own. The route we took hadn’t been used since the 1950s - and we were away for 4-5 weeks!

Where did the sandstone colour of the Camel Trophy come from?

I believe the relation to the brand – Camel cigarette, a now very common or recognisable colour, due to this event!

I have one funny story to tell, actually… When we were in Zaire for the event, the vehicles arrived and two of the Land Rovers were in the wrong colour! We got the paint in sandstone glow and we painted them the night before. We had a film crew at £5k a day so we had to get this done very quickly. A lot of the material that is gathered is used to promote the event, so it was crucial it was the right colour.

What have you got in your collection for people and to come and see at the Exmoor Trim showroom?

Some old Camel logo bags are the actual ones I used when we went to these countries (Brazil 1984).

History Newsletters – with original content and application forms, a few stickers from those times.

The Sign – the Scandinavian drivers selection boards which were put outside the actual camp. 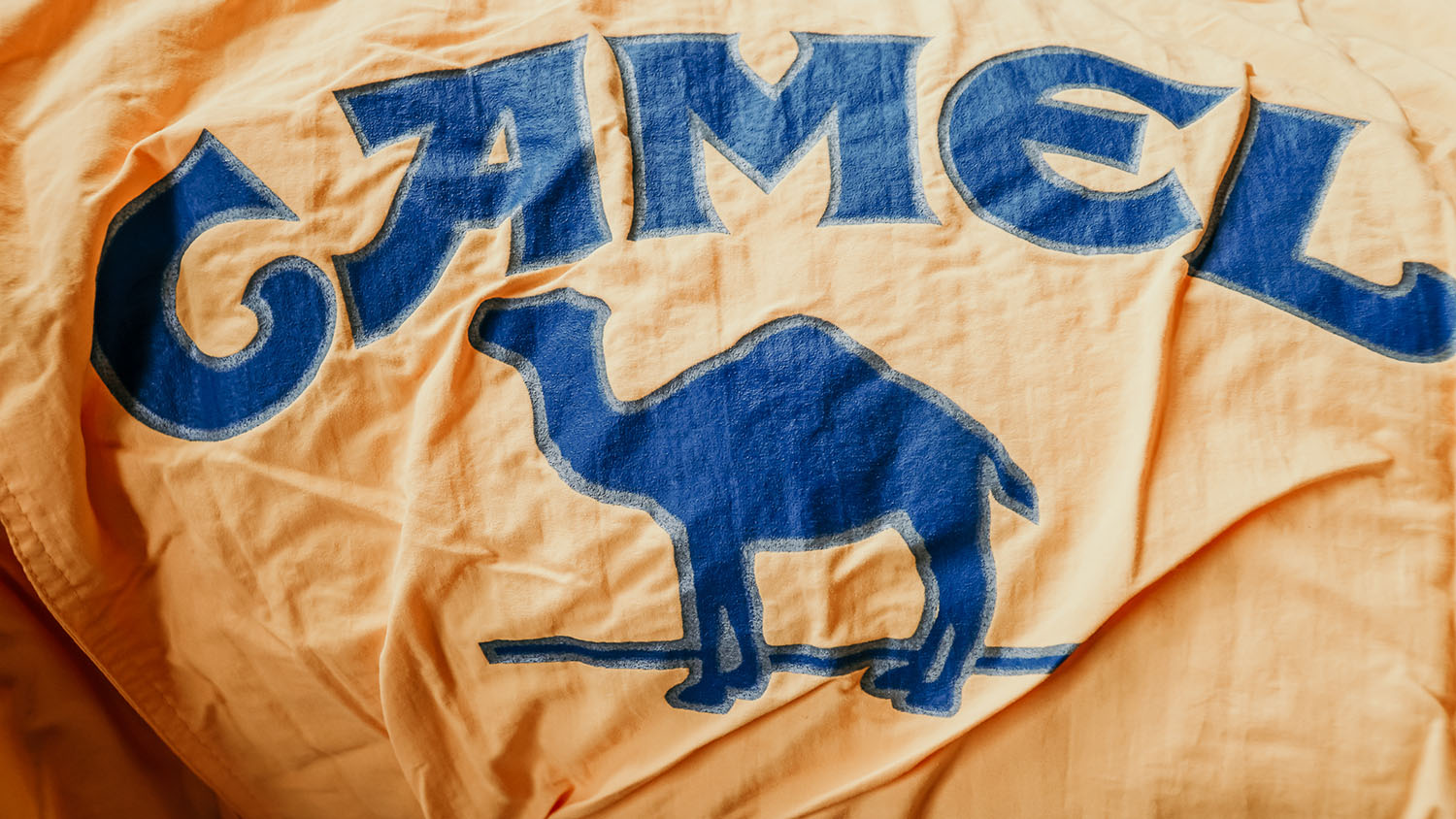 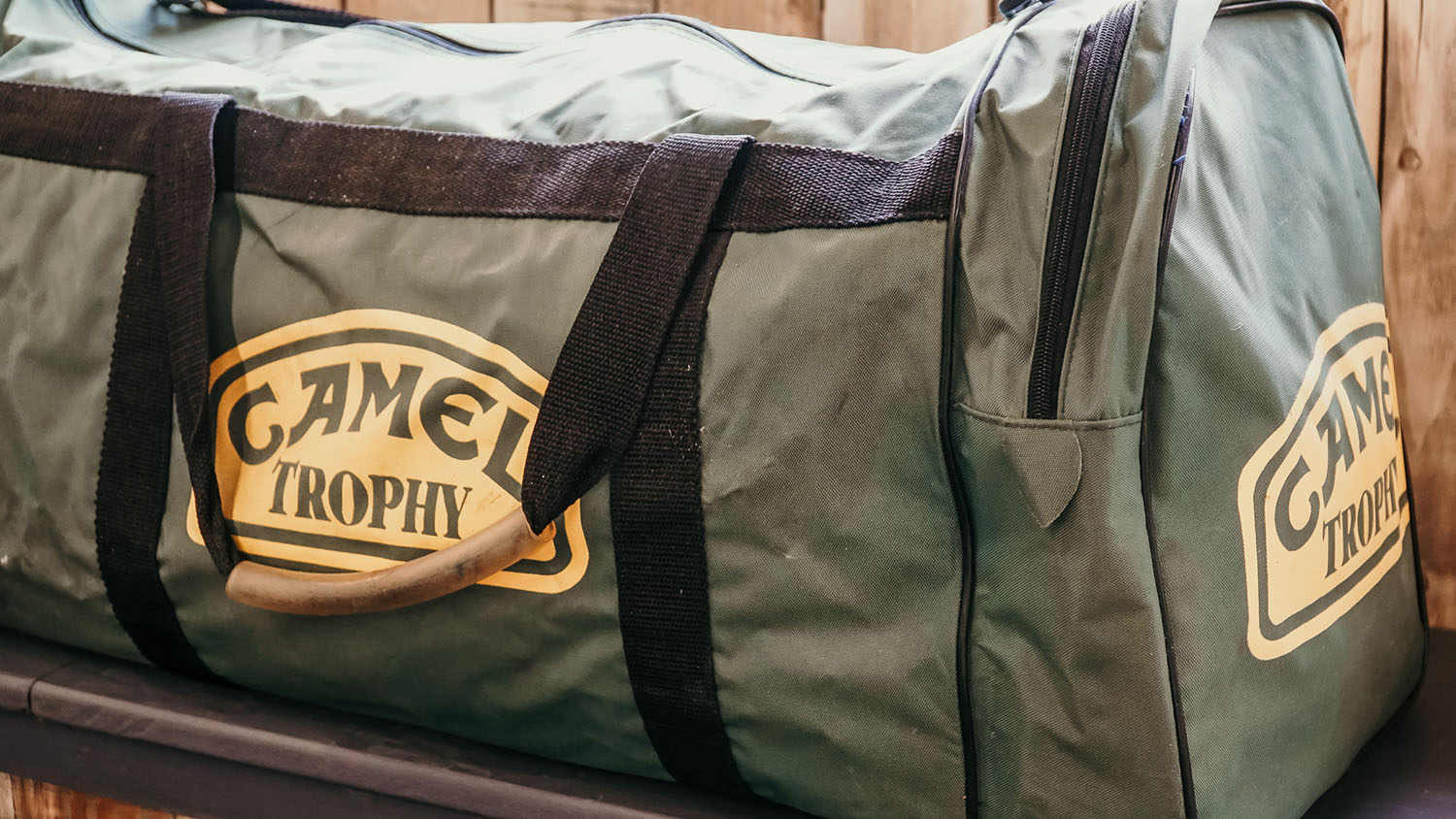 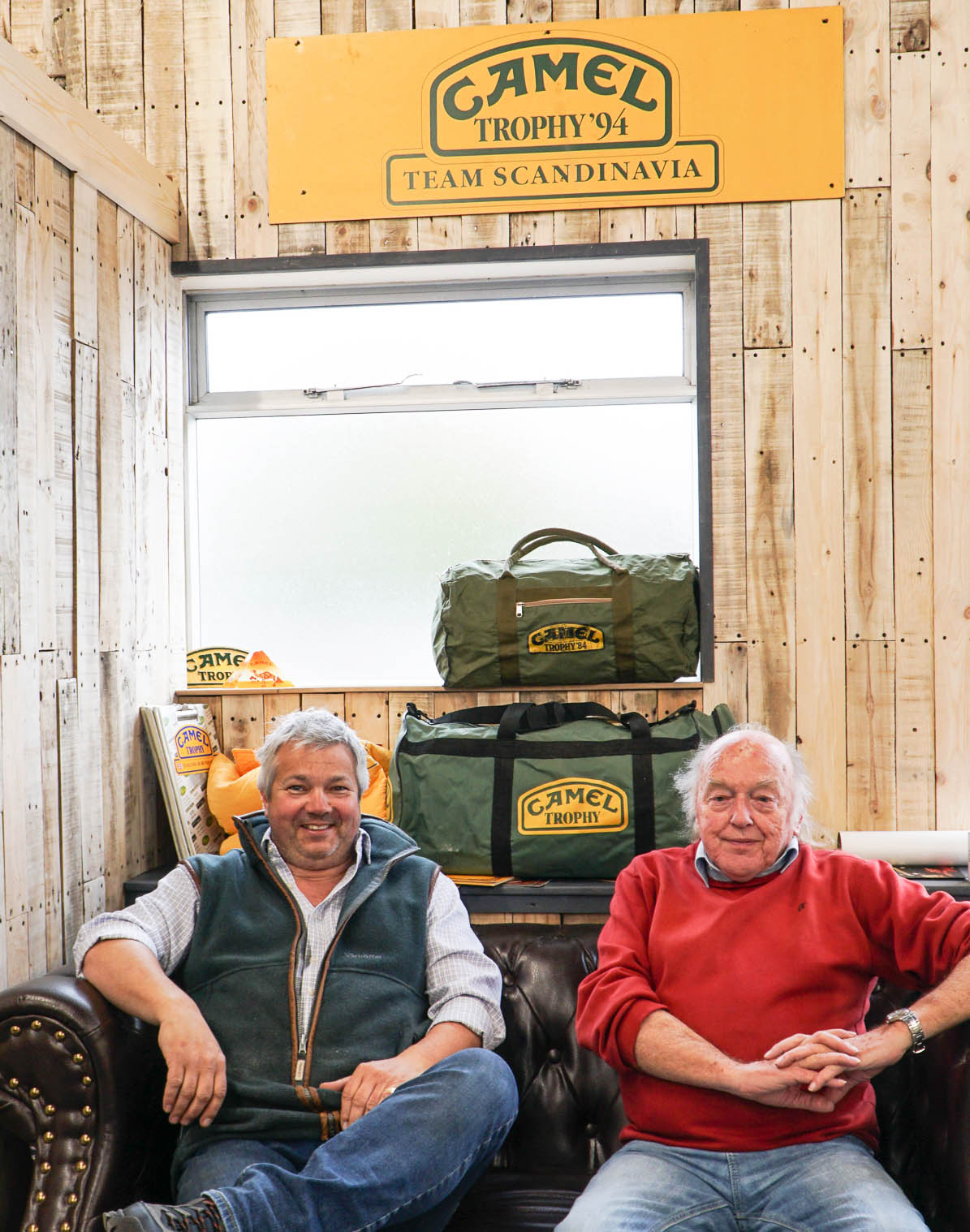 What’s your favourite piece of memorabilia from the collection?

I don’t think I have a favourite, but what I love is that some of the stuff reminded me of the first ever event I took part in Zaire which was my favourite trip.

What’s your favourite model/variant that has competed in the Camel Trophy?

Zaire was Series III Land Rover, Brazil was 110, Borneo was 90 - and generally, the ability in the vehicle was good whatever one it was. They were all fitted with winches.

Who was your most memorable team?

How long have you had your collection?

In 1982, I carried on even after I had finished. I got lots of memorabilia from the driver selection stages.

How long have you been interested in Land Rovers?

Since I was 18 – my very first vehicle was a Series I.

Do you currently drive a Land Rover, if so what model? 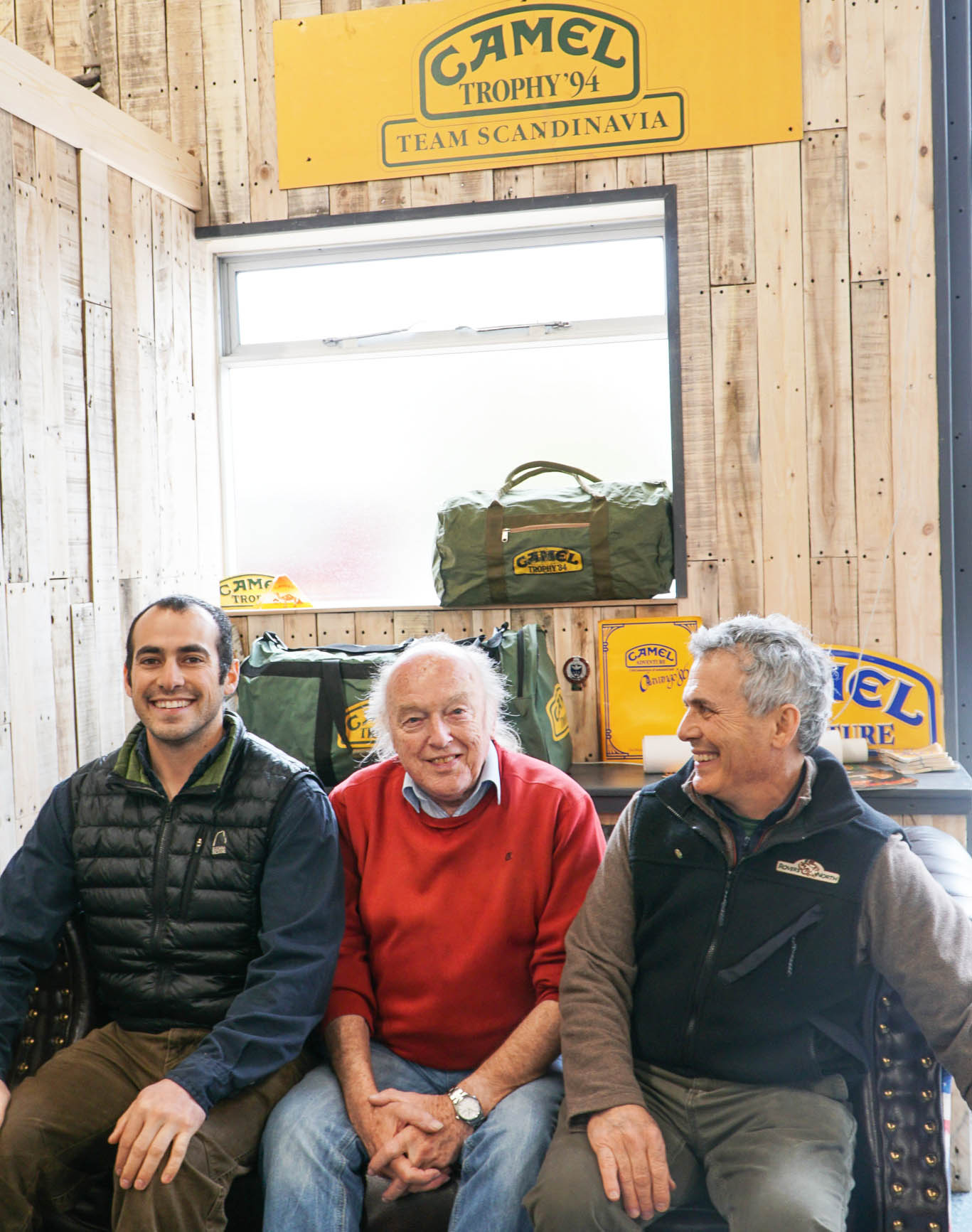 The Camel Trophy originated in 1980 with three Jeep-equipped German teams exploring the Amazon Basin. After that first event, the organisers turned to Land Rover for support and over the course of the next twenty years, all of the Land Rover vehicle range were used. Range Rover, Land Rover Series III, Land Rover Defender, Land Rover Discovery and Freelander vehicles all appeared in the distinctive "sandglow" colour scheme.

The vehicles were heavily modified by Land Rover Special Vehicles with a range of expedition, recovery, and safety equipment, including:

Here's the tabel of years, locations and vehciles used throughout Camel Trophys time: